AfterShokz OpenComm is a version of AfterShokz’s bone-conduction open-ear Bluetooth headsets paired with a DSP noise-canceling boom microphone. I love these for three key reasons:

The only drawbacks I can think of are that switching between computers and iOS devices could be a little tricky (see their instructions for multipoint pairing, regardless), and you might find yourself opting for the mute function of your phone or collaboration software instead of the headphone's mute function.

I started using bone conduction Bluetooth headphones years ago when AfterShokz came out with their first-generation models. I’m a runner and was sold on the open-ear design. On the trail, I was excited to be able to hear wildlife or other people around me. On the road, I’d be much safer if I could hear traffic behind me. With bone conduction technology your ear canals are not obstructed while music or podcasts are playing. You can enjoy your media and experience the world around you. I started using the AfterShokz Titanium model but they proved to be heavy and pinched my temples a bit too much. When AfterShokz released their AfterShokz Air model, I snapped up a pair and liked them much better. They were lighter and had a better bass response. The only time I don’t use them while running is in the winter when I wear a tight over-the-ear hat. In those cases, I go without music or use AirPods. Fast forward a few months and I bought a pair of the even lighter (and sweat and water-resistant) AfterShokz Aeropex for my wife. 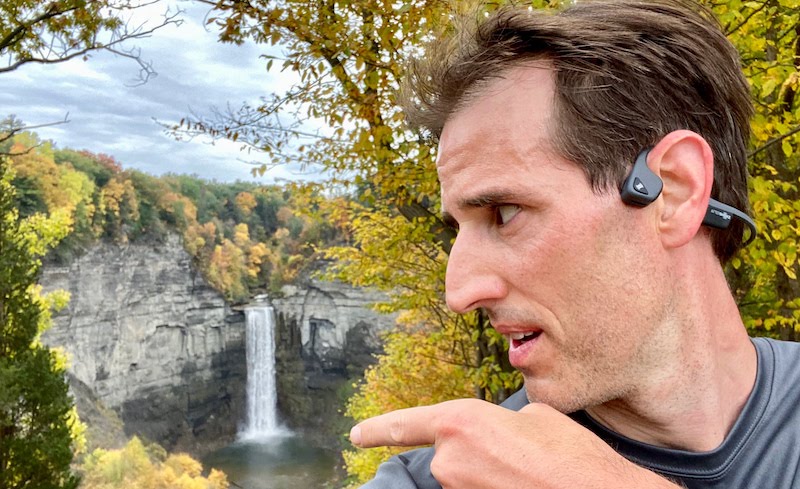 Using AfterShokz Air on a run.

I was intrigued when AfterShokz started advertising OpenComm as a solution for remote workers. I’ve been working remotely since 1998 and have constantly experimented with my audio for phone calls and conference calls. I’ve used Plantronics headsets, my cell phone with wired earbuds, and lately, a quality Bluetooth microphone and bookshelf speakers. I wrote to AfterShokz and asked if I could review the product as a remote worker. They gave me this product to try and I’ve been using it for the past two weeks.

What is AfterShokz OpenComm?

In short, it’s a version of AfterShokz’s bone-conduction open-ear Bluetooth headsets paired with a DSP noise-canceling boom microphone. They market it as a communication tool when you’re on the road, on the job outside, or at your desk. They advertise 16 hours of talk time. 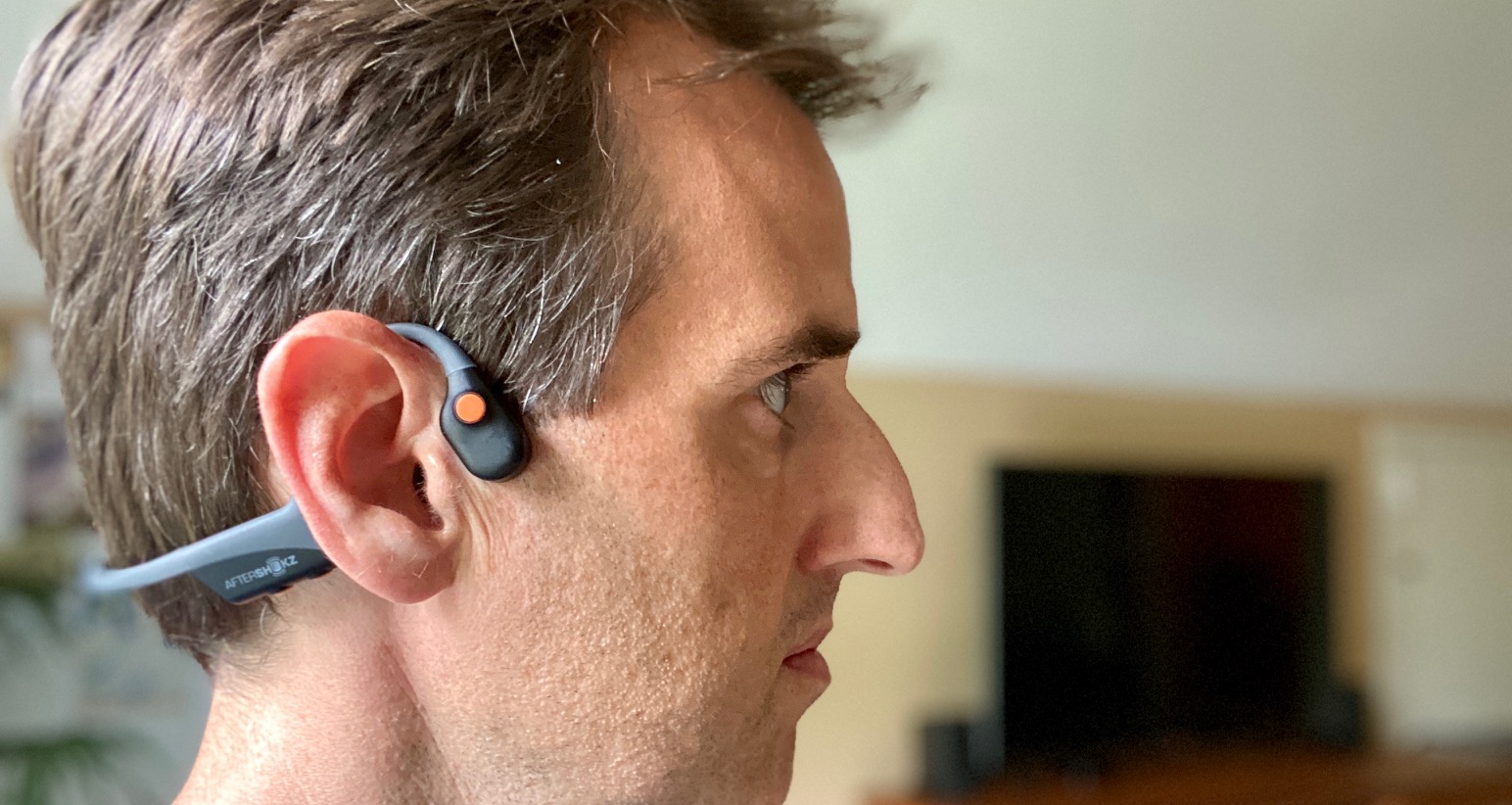 How do I use AfterShokz OpenComm?

I started using them with my MacBook Pro for work. Pairing them was straightforward and I found them to be both comfortable and aesthetically pleasing as I looked at my reflection in Microsoft Teams and Cisco WebEx. I mentioned earlier that I’d been using the combination of an external microphone and bookshelf speakers, mimicking a quality desktop speakerphone setup. This has all the advantages of that setup without requiring others within earshot to hear what was transpiring on my calls.

I paired them with my personal MacBook and conducted a webinar on WebEx. Again, the professional look of the headphones was great and nobody had any issues with the clarity of my voice.

The last connection I made was with my Apple iPad Pro. I was waiting in the car during my son’s medical appointment and joined my team’s daily morning meeting using Microsoft Teams. No issues there.

I found myself having to re-pair the headphones when I wanted to use each of these three devices, and in preparation for this review, read about their multipoint pairing feature. I loathe manuals, so it’s a testament to the out-of-the-box experience and inherent usability that I got as far as I did without reading too much about the product. Their quick start card told me much of what I needed to know. The multipoint pairing setup was smooth, and I connected the headphones to two MacBooks, an iPad Pro, and my iPhone within a matter of minutes.

I will never come close to the advertised 16 hour talk time they cite in their materials. I can’t imagine needing that much time in a day to talk to others! That said, I never experienced any problems with battery life over multiple days of using them for 3-4 hours each day. I don’t plug them in every night, but instead, find myself connecting them to the charger during lunch a few times a week. The charger, by the way, is a delight. It’s magnetic and snaps into place easily. It’s a nice departure from the running model that I have, which requires some dexterity to open the charging flap and properly align the charger. 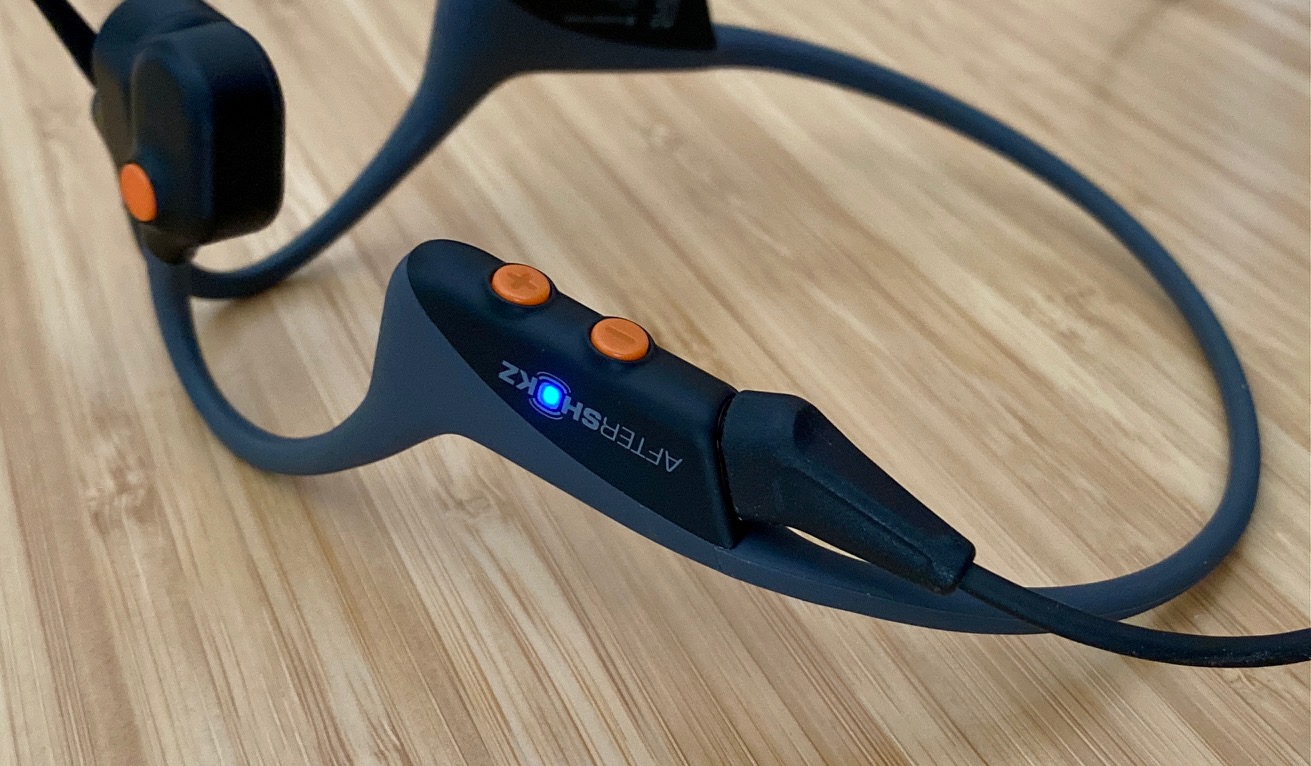 How does it feel to wear AfterShokz OpenComm?

It has the same lightweight feel as the Air when I’m wearing it. Almost indiscernible. It’s nice to not have something in my ears during calls. I can hear what’s going on elsewhere in the house (a bonus if you’re expecting someone at the door) and don’t suffer from audio constantly directed into my eardrums. I experienced less fatigue from participating in conference calls, likely from the open-ear design. They’re lightweight, flexible, and have a soft rubbery texture. I didn’t tire from wearing them for hours at a time. I would not want to wear them all day long, but that’s more a matter of personal preference. I found myself using them mostly for calls and preferred using my stereo for music.

How’s the sound quality of the AfterShokz OpenComm?

I did a speed test between the external microphone setup and the OpenComm with my manager. He evaluated the OpenComm as having clearer and crisper audio, likely due to the noise-canceling features of the boom microphone. I switched back and forth several times and he solidly preferred OpenComm. I never had a problem hearing others clearly, either. For “low talkers” (you know them, right?) I sometimes had to put a finger against my ear to hear more clearly, but that’s more a problem with bone conduction than anything else. Some voices just don’t transmit that well without blocking out other noises. 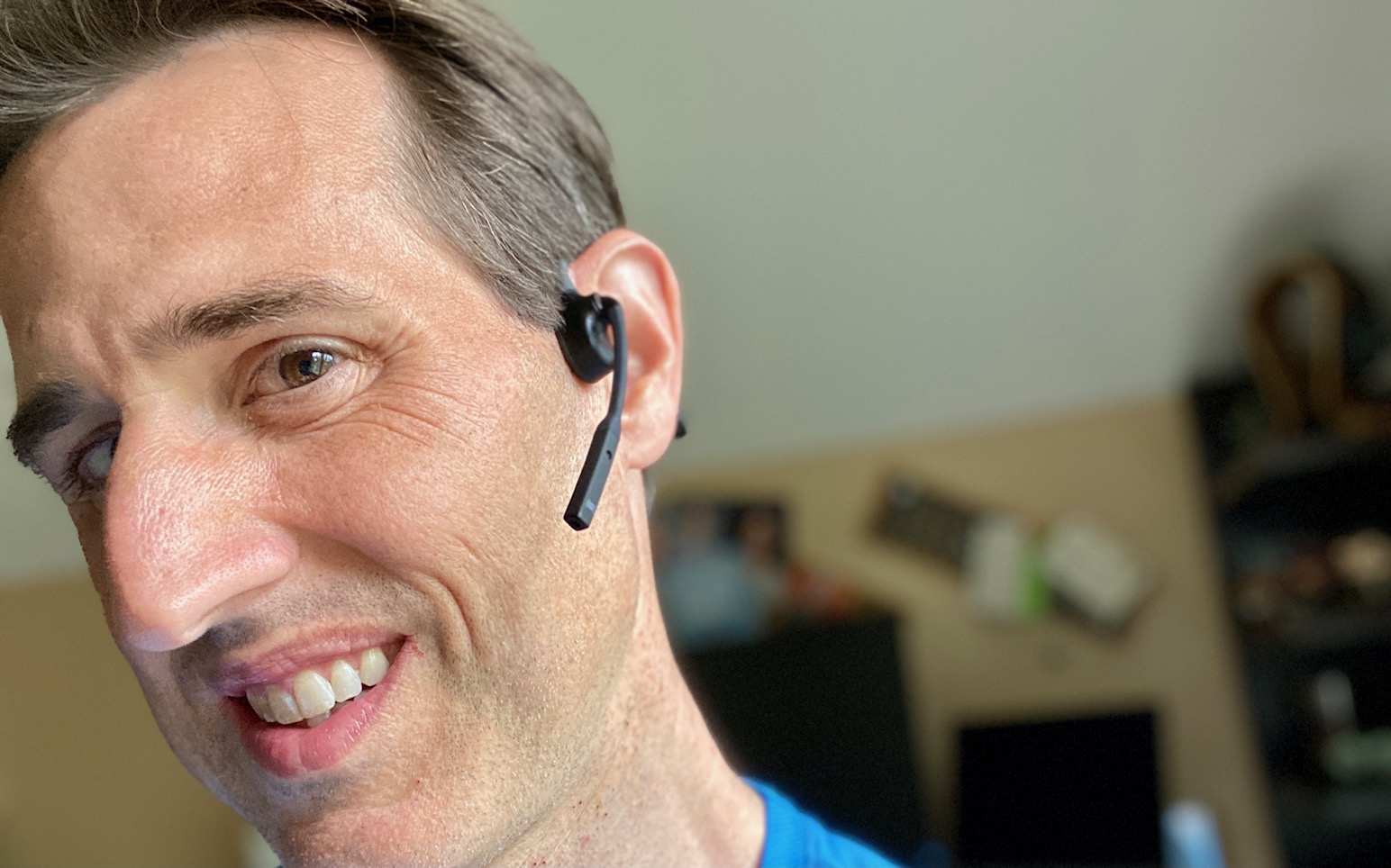 Switching between computers and iOS devices could be a little tricky (even with the multipoint pairing), but was easily solved by switching the headphones off and on when switching to a new device. I typically use one device for a stretch before needing to switch, so this is not a huge issue.

I never used the built-in mute function; I prefer to use the device or application’s mute function instead of headphone hardware. It just feels more reliable to me. AfterShokz advertises the hardware mute function this way — “press and hold the volume+ and volume- buttons simultaneously for two seconds” — which seems like it might be a little awkward, especially when unmuting. Two seconds can seem like an eternity, especially when you don’t get it right the first time.

I like the option to get up and move around while wearing these. I enjoyed the same flexibility when using wired headphones with my phone, but I can walk anywhere within the Bluetooth range of my computer with these. It’s a lot easier.

Overall, I love these for three key reasons:

They’ve been my go-to solution for audio at work for the past few weeks. I look forward to many years of enjoying them!

Learn more about AfterShokz OpenComm on their web site, or check out the links below for the AfterShokz products mentioned in this article.

Check out similar articles in the workspace category: